UPDATE:Probably just a scurrilous rumor. Updates from Ben and WINNERBK suggest that there has been a change of ownership, but that the theater itself isn’t going anywhere. WINNERBK says: “I heard from a reliable source that the Pavilion Movie Theater is going to remain a movie theater and WON’T be converted to luxury condos. My sources tell me that there is a long term lease with the theater and that it will continue as a theater for the next 20 years.”

Kensingtonmom writes on the Park Slope Message Board: “Has anyone heard this rumor? I know Pavilion is not the greatest theater, but I like having a movie theater in the neighborhood. Do we need MORE luxury condos?”

Here’s a snippet from the e-mail (or PSP post?) in question: “For those of you who haven’t heard, the Pavillion Movie Theater, as of June 12, is under contract to be sold to a developer, One Liberty Properties, Inc, to be turned into a condo building. It’s not clear what can be done to prevent it at this point… I called my block association but they are divided because they think the theater makes it harder to park on our block and many would rather have a residential building there.”

Brooklynpotter says this would only make the parking on 15th St. worse than it is already. He says the Pavillion has been a theater of one sort or another since the 1940s, at least:”I have a pic of it from when the buses going by were electrified… my accountant’s secretary grew up here and she performed in talent shows there. and i hear from another friend who grew up here that the guy who used to own it brought all the day old candy over to the 14th street jewish center on sundays.”

As Carnivore points out, the closing of the Pavilion would leave BAM as the only remotely walkable theater in the neighborhood. Netflix, anyone?

Rumor control in the Park Slope Message Board

Christian Lorentzen sent us a link to his take on Noah Baumbach’s The Squid and The Whale:

“People over age 50 are signally absent from Park Slope, Brooklyn. Itâ€™s a neighborhood where members of the ‘creative class’ move during their breeding years to mate, spawn, and keep housepets. The elegant brownstones are spacious and just barely affordable, grocery stores and veterinary clinics abound, the streets remain fairly safe, and a majestic park sits atop the hill. What better place to fall in love and raise a family?”

“But here comes the paradox. No zone â€“ besides perhaps a college dormitory â€“ could be more hostile to monogamy… The density of the Slopeâ€™s educated, attractive, liberal-minded population translates… into a practically limitless array of analogous sexual options within walking distance. The lonesomeness of the uncoupled, or the isolation of marital strife, can be assuaged without difficulty. Someone else will always be thirsty too, and chances are he or she is pretty good-looking, attended a respected college, holds a really interesting job, has an intriguing ethnic background, and thereâ€™s always the thrill of seeing the inside of someone elseâ€™s apartment…” Read more… 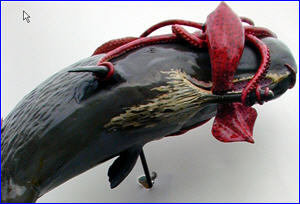 Also good is the New York Times review, which starts out like this:

“One of the ruling assumptions of American popular culture – or at least of American independent movies – is that everyone’s adolescence is uniquely miserable. Once we’re safely afloat in adulthood, though, we can begin to recognize the universality of our earlier experiences, and we can be grateful when, amid all the prurience and sentimentality that attend representations of adolescence, someone manages to get it right.”

Sarah from the Slope sent in this shot of the which has been “improved” by local movie buffs: “This was sent to me from my husband’s cell phone … I guess some artist-poets-vandals finally got tired of wondering when “Man on Fire” and “Van Helsing” would actually close… though I think the poet-vandals must have added some letters of their own, right? Or am I mis-remembering the movies that were on there before?”