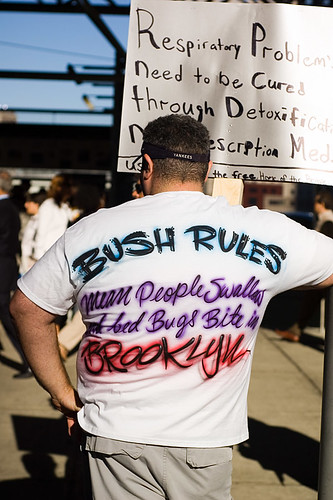 Is it legal? Is it binding? Is it discriminatory? What’s going on here? sloper111 writes on the Park Slope Message Board:

“I just signed a lease for an apartment in Park Slope… I know the Slope is liberal, and we don’t like that fucking Bush and his fucking war. But I can separate the asshole in Washington from supporting the troops. The landlord made me sign saying I wasn’t in the military and wouldn’t join the military. Now, I need an apartment… I can’t look for another now, so I signed.”

“This landlord won’t rent an apartment to someone in the military for fear of losing rent if they end up in Iraq. Am I the only one bothered by this?”

This may actually be pretty common. sarajean8 writes in reply: “Come to think of it, my lease had a whole page concerning this military topic…”

Read more on the Park Slope Message Board