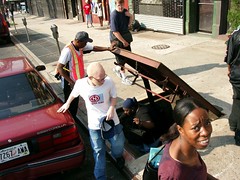 Scenes from summer 2003, originally uploaded by CatsFive, who wrote: “During the 2003 blackout, the subways, which run on electricity, all stopped. Lots of riders had to exit the subway in some pretty unusual ways.”

OK, we got a temporary reprieve… last we heard, the latest deadline is tonight at 12:01 am. To get you in the mood, STACEY posted the following tidbit (about the strike from the early 1900s) in the Message Boards:

“Subway motormen on the BRT had gone out on strike on Nov. 1st, 1918. Dispatchers and supervisors were pressed into service as replacement workers. That day, dispatcher Antonio Luciano was assigned as motorman on the Brighton Line that ran at that time from Park Row over the Brooklyn Bridge (which had train traffic at the time) and Fulton Street to the current Franklin Shuttle. He had never before operated elevated trains in passenger service.“

“… Luciano had to navigate an S-shaped curve on what would later be called the Franklin Shuttle at Malbone Street. The speed limit at the location was posted as 6 MPH, but those on the scene later reported that he roared through at what must have been 50 MPH. The first car held the rails, suffering only minor damage, but the second and third cars derailed, the second being demolished and the third nearly so. About 100 passengers lost their lives, though Luciano was spared.”