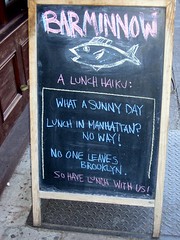 And ponder the media…

The word “illegal” has been thrown around pretty loosely, and over and over again, at every opportunity, in the media.

And now, that sentiment is being echoed by the anti-strike crowd (by now, that crowd numbers approximately 99% of Brooklynites, MTA employees excluded).

One of the other “messages” that keeps surfacing in the local media is the claim that the international TWU had advised the NY branch NOT to strike. It would be nice to verify these claims, but like pretty much everybody else, we spent an extra 5 hours today negotiating traffic and logistic hassles brought on just in time for Christmas (at least UPS is still delivering).

Oh, hey… there are about 50,000 comments on this in the Prospect Heights and Park Slope message boards… let’s take a look:

IT’S ON – TWU STRIKES!! (Chaos ensues in more than 100 comments on the Prospect Heights Board)

WAR STORIES: How did you get there?? (Prospect Heights Board)

PRACTICAL! HELPFUL! Get a ride, offer a ride, right here on the message boards! (Prospect Heights Board)

I would TOTALLY start an illegal taxi service… if I had a car.

Will “Slugging” be the next NYC commuter trend? (PH Board)

One Reply to “No Ride? Enjoy a Strike Haiku”