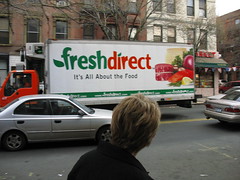 ……….You are all dutifully recycling FD’s ridiculously excessive packaging (brown paper boxes, pictured), so that helps. But what about those trucks idling all over Park Slope?

miriam asks: “Is anyone else bothered by the Fresh Direct delivery trucks sitting on the streets for half hour or more at times with their engines on??? Not only are they blocking traffic, but the polution and the noise! Is there something one can do about this??”

Simple answer: Yes. Just ask nicely. stacey says that she has approached the guys in the trucks and asked them if they could turn the engine off while they were unloading, and they always do.

But wait, isn’t their direct-from-warehouse model actually more environmentally friendly than traditional grocery logistics, that involve TWO trucks (distributor to grocer warehouse, grocer warehouse to grocery store) and a vast array of private vehicles? sweet tea says: “it is my uninformed opinion that FD gets more than its share of griping because it is a lot more visible than private vehicles or unmarked warehouse trucks. but i’d be open to some evidence that i’m wrong, so that i can have another reason to complain when they’re running the engine under my window.”

Ultimate Solution: Government subsidies to FreshDirect so they can buy airplanes and drop-ship to Park Slope rooftops: “they can charge us triple for the groceries due to the price of jet fuel!”

With increasing number of london hotels after the success of the paris hotel and the boston hotel once does wonder. Do we need another san diego hotel really?

3 Replies to “Is FreshDirect Destroying the Planet?”