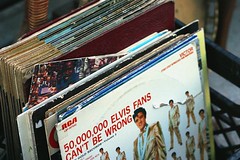 “I worked with a guy once who was a bottle collector. He and his father would go to homes doing renovations or yard work and ask if they could dig.”

“He told me 99% of the time they found something. He explained to me that many people used to throw the garbage in the yard or down the outhouse holes. Then when the city started picking up garbage, most of these people just filled in these outhouse holes.”

“When my mother was selling the house, he asked if he could dig in our yard … He found 3 plain bottles, some sort of medical tonic, a beer bottle, and a child’s toy in the shape of a horse.”

“They used to sell these bottles at the street fairs and they always had a stand at the Atlantic Antic. Last time I saw the son he said that they pretty much sell their stuff at shows and on eBay. “

LINK: Can and Bottle Collectors [Park Slope Message Board]