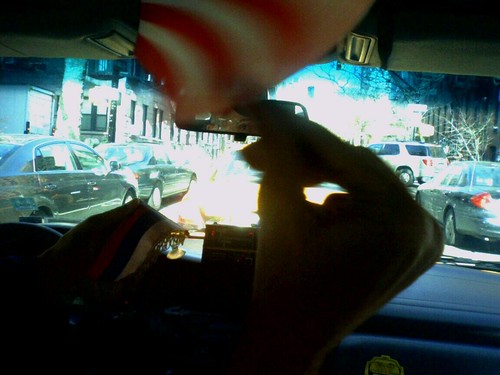 …and How to Make the Angry Yellow Cab Driver Go from Manhattan to Brooklyn, Despite Heavy Sighing, Muttered Profanity, Maniacal Driving, and General Rudeness, as reported by users of the Prospect Heights Message Board:

Q. HOW MUCH TO TIP A TAXI CAB DRIVER GOING FROM MANHATTAN TO PARK SLOPE/PROSPECT HEIGHTS?
A. “I give about 15% – 20%, or a minimum of $2-$3 if a short ride.” -VeggieQueen
A. “I tip at least $3 if they’re coming over the bridge from Downtown, more if it’s from midtown and up…” -daisyh
A. “If I take a yellow cab home from Manhattan I tip about 15%, depending on how the driver reacted when I told him I was going to Brooklyn…” -em
A. “I usually tip $2 to $4 unless it’s a really long trip.” -neene

Q. CAR SERVICE: CAN YOU SKIP THE TIP? Seems like a lot of people tend to tip cab drivers, but avoid tipping the car service drivers, on the rationale that they drive their own cars and don’t have to pay for a medallion. Apparently, some car services automatically add a gratuity (~10%) to the fare, according to kristina.
A. Magic 8 Ball says: Unclear. Shake again. From Idlewild (who is a former car service driver): “Not all car service drivers own their car, and even if they do, they are still paying hefty maintaince and tax costs.”

Q. WHAT IF THE DRIVER COMPLAINS/REFUSES TO TAKE ME BACK TO BROOKLYN? This used to be almost the rule, and now is becoming the exception. But it still happens. A lot. What’s more, some cabbies will refuse fares across Brooklyn if they deem yours not worthy enough. As far as we know, none of this is legal.
A. Legal or not: don’t even let it happen. Pre-empt it. Jump in the cab and slam the door before disclosing your destination. If the driver balks, remember this phrase: “You may not want to take me to Brooklyn, but you’re not getting another fare until you do, because I’m not getting out.” -Carnivore

Q. RUDE DRIVERS: SHOULD YOU GET REVENGE? And should you report the cabbie who won’t go to Brooklyn??
A. Don’t bother, unless you’re unemployed, or especially vindictive: “You can complain all you want, but to have any real action taken, you have to turn up to a TLC hearing in person, which usually means taking a day off work. What a shock! The TLC isn’t concerned about weeding out lame drivers, or serving the entire NYC populace.” -ANFIELD

26 Replies to “Brooklyn Taxi Guide: How to Tip, How to Stiff…”