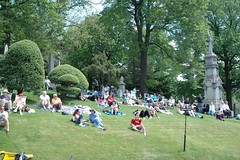 Cars: Of course.
Bikes: No.

communitybuilder writes: “The no bikes rule in Green-Wood Cemetery is bizarre, nonsensical, and most of all, a real shame. Why can’t I go with my old Brookyn cousin by bike to visit his parents’ graves?”

“That was our plan a couple of summers ago, but we weren’t allowed. Green-Wood management didn’t think biking to the grave site was ‘compatible with the decorum’ of the cemetery. Rather, they preferred us to visit the cemetary in an exhaust-spewing, loud, broken down ’87 Toyota pick-up. Rolling up in that piece o crap vehicle, we were given carte blanche to drive anywhere we wanted on the grounds. Rolling up on bikes, we were treated like criminals.”

“I think this rule is so ridiculous that I actually wrote Green-Wood’s management a letter a few years ago urging them to change the rule. I hope other people might write them too. Their response to me was that they view bicycles ‘as recreational in nature.’ Try telling that to the 130,000 New Yorkers who now use bikes to commute to work at various times during the year…”

“I know it seems weird to some people to get exercised about not being able to ride a bike around a graveyard. But it’s actually a common thing in other cities. I’ve done bike rides through the old historic cemetaries in other big cities, and it’s fantastic…”

Time to give back Greenwood to the biking public? More info in the Prospect Heights Message Boards

6 Replies to “No Bikes in Greenwood Cemetery??”