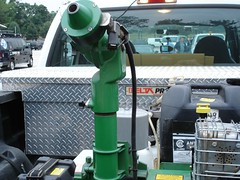 Close-up of the spraying device

oh feck. how much duct tape are we gonna need for this?

i’d wish they’d stop spraying that crap on the streets
couldn’t we release an infestation of bats to eat all the squeeters?

Counterpoint from Dr. Carnivore: “Bats are a major rabies vector, and rabies is much more deadly than West Nile!”
In all seriousness, Carnivore notes that the situation is made to sound worse than it is: “Don’t get me wrong- it’s important to know where cases develop and when. It’s just not much of a threat to most healthy people. West Nile can be a serious or even fatal illness in the very young, the very old, people with HIV and others with impaired immune systems. Most people who contract it get a flu-like syndrome, feel lousy and get over it.”

“It’s an important public health issue, but the media has raised the level of hysteria to the point where young healthy people without any symptoms come the the ER demanding to be tested for West Nile (which requires a spinal tap) because they have a mosquito bite.”

More on bugs and disease in the Park Slope Message Boards

Due to availability of class airline tickets, everyone wants to get on flights to boston or even flights to paris. Even the orlando flights are selling more since they became cheap flights.